skip to main | skip to sidebar

I really hope you aren't getting the impression we are bad parents/dog owners. Because if you are, you might not want to read the next instalment of The Tails of Jack 'n' Ralph.

In our defence, it is a bit like having kids. They fall over, break bones, eat worms - it's all part of being a kid and a parent.

Hmmm, maybe I should gather some cutesy pics and stories of them being spoilt rotten (which is what they are more well known for) so you know we don't just have bad things happen to our dogs.

So, with that in mind, here's the story of Ralph and the Four Corn Cobs.

Ralph was a curious little puppy - as opposed to now where he's just a really big curious puppy. 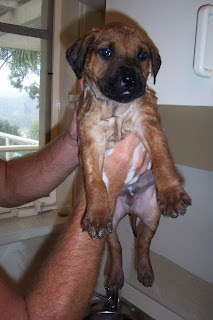 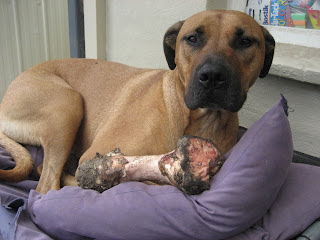 And after just a teensy bit of growing

It was in the heat of the Australian Summer so there were a lot of BBQs out on the decking. We inform all of our guests to please ensure they don't leave any food around, especially bones, otherwise the dogs will find them. Dutifully and respectfully all of our guests put their scraps in the bin.

After a big BBQ in 40 degree heat and an overnight temperature of 28 degrees we/I thought for a bit of fun it would be good if we/Hubby pitched a tent in our backyard. Please do not look for any logic in that other than it was a nice night and the best view from our block is on the patch of grass/dirt in front of the garage. So that's where we/he pitched the tent.

I was woken up at 6am to the sound of a hurling dog. Charming, I know.
Being the good Mother I am I crawled out of the tent and checked out what was happening.
Poor Ralph was looking very sad and amongst everything else, there was a corn cob. Turns out he had ransacked the garbage bin overnight where all of the scraps had been put.

Rather concerned at this I mentioned it to Hubby, who was as unconcerned as I was concerned.
Over the course of the day Ralph became lethargic and my Motherly instinct (which is only applicable to dogs) told me something major was wrong.

9.30pm Sunday night
Ralph throws up everything he'd managed to get down over the course of the day.
Hubby at 9.31pm: "Ok, he needs to go to the vet"

Off to the Emergency Centre because all the vets were closed.
The vet had a poke around and made some faces of concern. I mentioned he'd thrown up the corn cob in the morning. More look of concern.

The diagnosis at this stage was, "We need to feed him some tracking devices to see at what point they get lodged. This will give us an idea as to what might be wrong".
We had to leave him there.
$250 worth of tracking devices and a phone call an hour later they tell us the bad news. He has many obstructions in his stomach and intestines and if he isn't operated on immediately he will die.

Naturally we said "Whatever it takes".

I rang them the next morning to see how his operation went. They had retrieved 3 corn cobs but it was a major operation involving them taking out his intestines, working through them by hand checking for any obstructions then putting it all back in.

I asked if we could see him. She said come down after 2pm.

Hubby and I met at 2pm at the Animal Hospital and went to see our little guy. He had a drip in his arm, wearing a gown like a boxer and was in the middle of one serious trip from the morphine. We both broke down!

The vet came in and told us we shouldn't be visiting, gave us the lecture on responsible pet ownership (I really don't know what we could have done about him knocking over the main bin) and then went on to tell the lovely story of the old dog that came in having eaten a sock, they removed it, then died a week later because they missed one. Thanks for the pep talk buddy and wouldn't you naturally look for a pair?!

He stayed in hospital for 5 days before he was allowed to come home. He became the nurses company during the overnight shifts in their staff room. 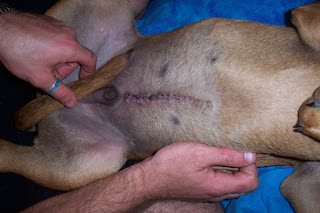 Back then he was only a little tyke, but the scar has grown with him and is now close to 40cms long.

They removed 3 corn cobs in total (and a large chunk of our bank account). One from his intestine, one lodged in the opening between his stomach and large intestine and one still in his stomach.

We didn't eat corn cobs for more than a year. Now when we do we burn them!

Some good news from it all though.
While they were operating they found an issue with his stomach which is known in his breed so they fixed that while they were there.

And if I hadn't have insisted we setup the tent that night we would never have known about the initial corn cob and may have left it too late.
They say some things happen for a reason.

Even now that he's fully grown and 45kgs, we still take him to the Emergency Centre when he needs his shots, has cut his foot open, removed a toenail and the nurses smile when they see him and call him "Little Ralphy".
And so do we.
Posted by Narelle from Aus at 10:34 PM

Narelle from Aus
Give me a shack on a beach where it is hot all year around.